August 8th 2017 marked the 72nd anniversary of the establishment of the Nuremberg military tribunals created on the ashes of the World War II in order to prosecute Nazi crimes. These military tribunals have been the raison d’être of a new form of supranational justice which specify the paths of international criminal justice as justice which enshrines an absence of immunities for high-ranking persons and assigns individual criminal responsibility for such serious violations. They were soon to be seconded by the military tribunal of the Far-East, and five decades later, by the United Nations ad hoc tribunals which had been given specific jurisdiction to try crimes committed in the former Yugoslavia and in the context of the Rwandan genocide. No sooner had ad hoc tribunals been made operational than some commentators were pushing for of the institutionalisation of the universality of international justice. They argued there is no reason that what has worked for the former Yugoslavia and for Rwanda – despite the great shortcomings in each situation – would not work for the rest of the world. They supposed that there could be an international system of justice in which the Prosecutor would have a sort of magical capacity to fetch every suspected criminal wherever he or she is.

Meeting in Rome in 1998, the international community therefore agreed to universality by creating an International Criminal Court as a permanent judicial body with an unprecedented premise of complementarity to national jurisdictions. In 15 years of operation, this tribunal seems to be the international institution that has suffered the most shocks at the beginning of this 21st century: senior leaders under arrest warrants still move around the world, key witnesses are assassinated, charges are abandoned by the prosecution itself, preliminary inquiries stagnate whenever the most powerful are concerned. In Syria, as well as in situations wherever nationals of permanent members of the Security Council and their allies are targeted, there is total inactivity. Even where the judicial system seems to be moving forward, the immunities of heads of state on the one hand and, most seriously, immunities for heads of non-state parties on the other hand, have come to poison the procedure. On the African side, some are already slamming the door on the court, threatening to make a collective withdrawal from the system while giving the impression of not having been sufficiently associated with the project of the globality of justice.

Seven decades after the Nuremberg tribunals, now that the ad hoc tribunals are in a process for gradual completion of their work, and in view of all the challenges faced by the ICC in only 15 years of operation, this conference brings together different perspectives on this unique and topical theme: “Is the world ready for global justice?” 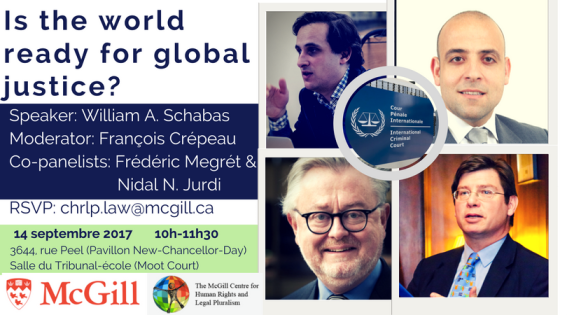 Price: the event is free of charge but beyond the Facebook page, registration is mandatory (RSVP: chrlp.law@mcgill.ca)